Science and technology are playing a larger and larger role in...

One month before opening, organizers implement measures to minimize risks

TOKYO -- Some 15,000 athletes and 53,000 officials from 207 countries are expected to enter Japan over the next few weeks for the Tokyo Olympics that are now just a month away.

While some medical experts have warned the games could result in superspreader events, organizers and political leaders in Japan insist they are taking measures to ensure everyone would be "safe and secure."

At the heart of the preparations is the Olympics village in the Harumi waterfront district of Tokyo -- a 44-hectare complex of 21 buildings where athletes will eat, sleep and train in bubbles. They will be frequently tested for COVID-19 and have to obey strict movement and social distancing restrictions.

A clinic will be open around the clock to provide care for any athlete thought to be infected. While waiting for test results, the athlete will have to quarantine in a private room. From July 1, any overseas athlete who tests positive on arrival will be taken for a confirmatory PCR test. If the result is positive, the athlete will have to isolate in a facility set up by Tokyo 2020.

All athletes will have to take daily tests, with up to 18,000 saliva samples expected to be collected each day. Organizers are considering measures such as video recordings and spot checks to ensure rules are followed.

Some 45,000 meals a day will be provided in the 3,000-seat two-story main dining hall. But to avoid overcrowding, athletes can look to a screen to check the numbers in the dining hall. The screen is refreshed and updated every two minutes.

Another change is that the buffets are gone. This year, cafeteria staff will place food on trays for the athletes who will eat behind plastic screens and be encouraged to keep a distance of at least 2 meters from the next person.

Alcohol can be consumed but athletes must drink alone in their rooms. Condoms will be handed out at the point of departure so that athletes will not have to opportunity to use them while still in the Olympic Village. Because of these measures and restrictions, this year's Olympics have proved to be even more work than other years. But International Olympic Committee President Thomas Bach struck a bullish tone: "Here we go... We are ready," he said at a virtual conference between organizers on Monday.

Bach's confidence is shared by Japanese organizers. "It's not about my pride or the economy, we will host the games because we can take appropriate countermeasures in Japan," Prime Minister Yoshihide Suga told reporters last week.

Bach said that "well above 80%" of athletes will be vaccinated but they, along with the rest, will still have to face the rules.

But apart from the athletes, the organizers also face the challenge of keeping the 8,000-or-so volunteers who work in the village COVID-safe. Organizers say those who are expected to come into close contact with athletes will be vaccinated, but it remains unclear if this will indeed be the case.

Then there is the issue of the spectators. Although the numbers have been capped at 10,000, or 50% of capacity, at each venue, the figure does not include officials and sponsors, or the children who are due to attend with their schools.

Spectators will not be asked to prove they are COVID-negative, but they will have to wear masks, travel directly between their accommodation and venues, and are not allowed to cheer during events. Suga said this week he would ban spectators if there was a surge in infections. 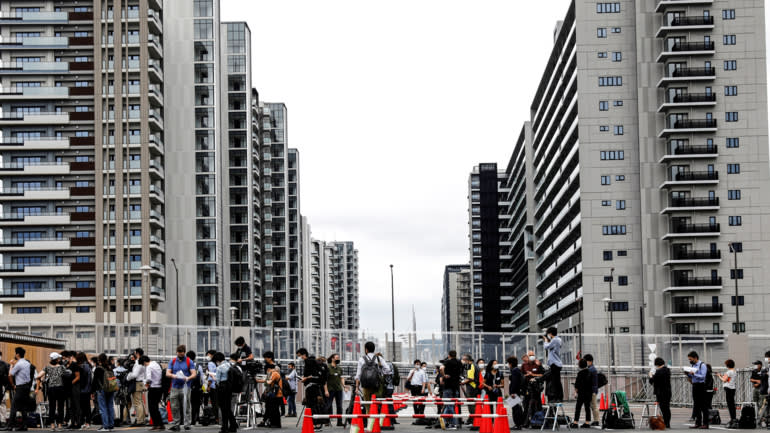 But medical experts warn that the biggest problem was the false sense of security holding the games gives to the public. Shigeru Omi, the government's top medical adviser on COVID-19, warned that holding the games could send a "contradictory message."

"Many people have endured [restrictions so far] but their patience is reaching the limit," Omi said, adding that people could lower their guard as they see the Olympics going ahead.

The main hope now rests on vaccines. After a slow start, Japan is giving shots to around 900,000 people a day. More than 7% of the population has been inoculated and workplace vaccinations began on Monday.

Public support for the games has grown with the rollout of the vaccination program. In a recent opinion poll conducted by Asahi Shimbun, 34% of respondents said the Olympics should be held this summer, up from 14% in a May. In the survey, 32% said it should be canceled, down from 43% last month.

Japan has secured 40,000 vaccine doses for its athletes and those involved in the games. Since June 1, the athletes have been receiving shots, with 95% expected to be fully inoculated before they start. 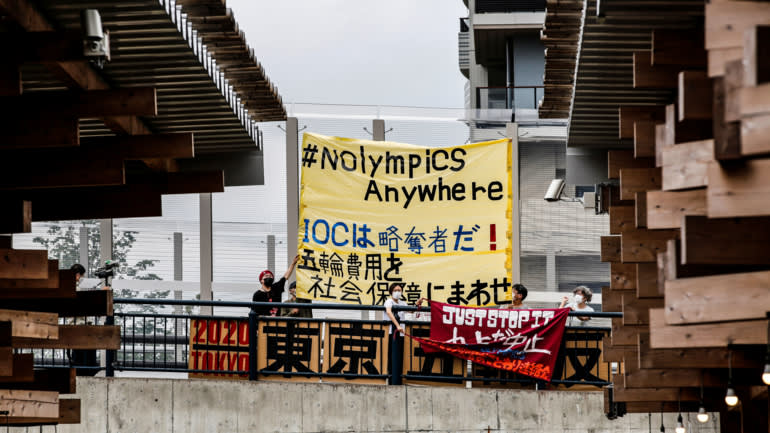 But the arrival of overseas athletes has shone a light on how challenging the next few months could be.

A coach in the Uganda team tested positive for COVID upon arrival in Tokyo on Saturday, despite the entire delegation being fully vaccinated. The remaining eight team members traveled to Osaka by bus. According to Tokyo 2020, they were not thought to have come into close contact with the coach.

However, the eight athletes on Tuesday were recognized as having had close contact with the coach, and it turned out that they went to Osaka without this having been determined.

The more contagious Delta variant that originated in India is also a concern. Nobuhiko Okabe at the Kawasaki Institute of Public Health, a member of the expert panel advising Tokyo 2020 on COVID measures, said that the risk was that little was known about the variant. "We have to prepare on the premise there are still risks," he said.

This is proving tricky to manage. The IOC said last month that athletes from Bangladesh, India, Maldives, Nepal, Pakistan, and Sri Lanka must be fully vaccinated. Organizers have asked Indian athletes to take tests everyday for seven days before departing for Japan. They have been asked not to train with other overseas athletes at the village for three days after arrival.

But the Indian Olympic Association said the tighter restrictions for its athletes were "unfair and discriminatory," according to local media. Kaori Yamaguchi, a board member of the Japan Olympic Committee, said that the games could be "unfair" to some athletes.

IOC president Bach, who is expected to arrive in Japan on July 12, however, has repeatedly stressed that safety was the priority in this extraordinary Olympics. "This work has not finished, it continues," he said.

CNBC: The top 10 cities in the world for expats to live and work abroad